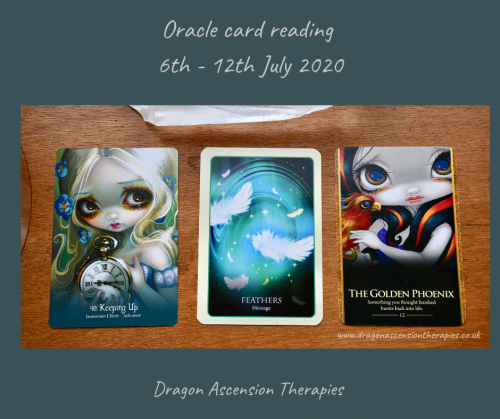 And we start the week with a sense of things possibly running a little out of control. Almost as if running full pelt only to stay in the same place, or even a few steps backwards.

So much is going on right now it may be a little overwhelming. Going from a very sedate slow pace almost back to full throttle over night. It can take a lot of adjustment.

This is for many a transition of going back to what your routine was at the very start of the year. And lets face it there are several things we may no longer wish to be part of the routine anymore.

So look very closely and decide what are you chasing that actually you are finished with now? Can you let it go and instead run with your newly discovered priorities? Could you go at a slower more simplified pace and still get done what is needed without exhausting your energies and resources?

If you feel you are constantly pushing and getting nowhere it may be time to change tact. To stop pushing and see how things are flowing first. You may be missing something very obvious that you can’t see in the rush.

Many of us have been gifted with an abundance of time just recently – and for some this is coming to a close. But before the panic sets in look at the watch Alice is holding in the card – can you see it melting away? It’s a reminder that time is a human concept. And you DON’T have to be ruled by it.

For a handful of others it may be time to start pushing ahead with something. Or at least putting some form of plans down on paper. While I wouldn’t suggest taking massive steps or big leaps right now – you have to trust your own judgement. If it feels right then start there. If it doesn’t consider this an opportunity to look before you leap.

I have a wry smile on my face as I translate this card as I am constantly surrounded by birds. Indeed I would be a bit lost without them.

We are reminded of nature, season, natural law and the simple joy of being present.

Sometimes though we are left feathers as a sign or confirmation. Some see it as angel messages, other as a message from those who have passed. These tend to be perfect white feathers that appear “randomly” out of the blue. But in truth they are feathers of all kinds. I’ve had some amazing pheasant ones in the past 3 months.

They are confirmation to questions you have been asking or a gentle nudge in a specific direction.

But for some this card is about being open to RECEIVING the guidance and help you are asking for. Try not to be so focussed on the asking that you miss the signs when they appear.

They can be subtle so be more presents if you can. You may start to see patterns appearing.

As an aside if you get n assortment of feathers left for you take some time to identify the bird type. You may get even more information when this totem appears. An example an owl feather may suggest the requirement for increasing your knowledge of a subject matter.

Another bird link and this is a card that turns up relatively frequently. And thats no bad thing as I see this card as opportunity. Don’t read the secondary text on the card as something literal in terms of the global stage.

An opportunity to revisit a person, situation, challenge that you thought had been dealt with – but has popped up again. It may be more work is required, more layers are being released while you have the energy to deal with them, or something has changed.

Anytime phoenix pops up it’s about a pattern/cycle completing and new one about to begin. And I’m aware of a lot of Phoenix energy recently and it’s powerful to work with rather than against.

If you have an urge to change exercise regimes, diet, what you allow into your life – this is an indication of this energy. Anything that breaks from the norm and concentrates on self care. It may even be as small as setting your phone down and going outside rather than delving into the online world.

Whatever it is listen to it.

For some others if this recurring energy, person, situation fills you with dread or a level of anxiety – ask yourself why. Where does this sit within and what can you do to move things on? Do you require help or facilitation? Can you see a different perspective after the distance and break?

What you need will present itself (see earlier cards for the week) when you are open to the possibility of change.

Start of the week : if things feel as if they are speeding up around you and you’re stuck in neutral ask yourself – do i WANT to be running at that speed again? Are you happier at a slower pace? Whichever feels right for you ease yourself in. You can make time – we have learned that this year so far. Don;t lose perspective.

Mid week : pay attention to the messages you are being given – or the confirmation to the questions you are asking. If you get caught up in the asking you may miss the responses. Be present, and watch the smallest of details.

End of the week : if something you thought or felt had been sorted flares back up don’t panic. It may simply be the last few layers leaving. Or allowing you to see things from a new perspective. If you need help or guidance it will be there when you ask.