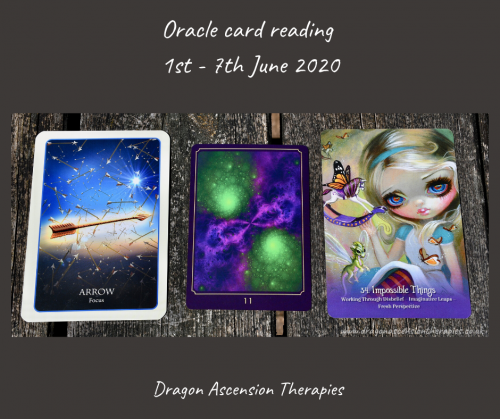 Ok a few of you may get a bit annoyed with this one but sit with it. The main thing this card yelled at me was a lot of people are very unfocussed (and dare I say it ungrounded) and it’s time to change this. If you look at the back ground of the card you’ll see scattered arrows and the one in the middle is clear – what does that tell you?

Now I appreciate we live in unusual times right now but remember this – there is no such thing as “normal” only routine. Again sit with that for a bit – you may be taken aback with what pops up when you let it.

But even through the noise, the chaos, the confusion and the unknown you can be focussed. So where in your life are you not quite where you should be? Perhaps time to focus your energies there first. You’ll already know where you are being steered as it may have been feeling a bit off for a while.

Pay attention to the smaller details around this as they will steer you clear.
Do the needful and allow yourself to move on – or change direction/your mind.

For some others it’s time to stop faffing.
And I mean that. If you keep ignoring what you’re being shown it’ll vanish and you’ll kick yourself later. So FOCUS on what you are being shown, what you need to be doing and get on with it.

Harsh I know but sometimes we need a boot applied to our rear end – consider this said boot. And it’s not huge life changes but it’s something you’ve been talking, havering or debating about for too long………

I had a boot applied to my rear end yesterday and I sorted something I’ve been muttering about for years. Took less than 5 minutes in the end.

I’m aware we had this one only a couple of weeks ago. Either the energies are still very much at play , or , you ignore/disbelieved the message the last time. Let’s go through this one at a time.

There are no limits with energy other than those we place upon ourselves. So when we say possibilities are endless it’s a statement of fact. If this messes with your head a bit think of it as infinite directions you can go, or timelines you can choose.

We are in a very potent time energetically and those of you who have seen manifestation working at a rate of knots will know what I’m talking about. Take off your limits and imagine what could be possible – without looking for barriers or excuses.

Call it day dreaming if you wish – but do it anyway. Where do you see yourself or wish to see yourself. Imagine all the possibilities. When you sit in that space of creation anything is possible. Be clear in where you wish to go or who you wish to be and the Universe will pay attention.

For the other option – those who have been ignoring or rebuffing it’s time to listen up. Sitting in a space of fear, of lack , or of shadow will only attract more of the same. If that’s what you are making yourself abundant in guess what – that’s what you will manifest for yourself.

It’s time to realise you CAN change the pattern, you CAN choose another way and you CAN see the good that is out there. You don’t have to sit in this just because someone else say’s its so. You don’t have to stick with a certain mindset – you can always CHANGE YOUR MIND. Free will and all that – but if you’re comfortable where you are nothing I say will dent that, and to be honest this most likely isn’t a page that’s for you.

So truly look at where you are, ask what you can change and do it. Action is the first step to empowerment and for accepting responsibility for your own actions, beliefs and decisions. And realise you have unlimited options, pathways and roads that you can take. So try a different one and see where it takes you.

Now this is an interesting one as I have to go through 3 decks before the right card for the end of the week popped up. And this is a fairly new deck for me so I’m going on gut.

This one coincides with the start of the eclipse window on the 5th which starts with a lunar eclipse/full moon combo. So we already have some interesting energies playing about.

While Alice in Wonderland was never a book I connected with I get a lot of what was being presented.

Thos card with it’s wonderful fantastical creatures is a nod to believing in the impossible, seeing things with fresh eyes, or a new perspective. Of thinking outside of the imaginary box(es) we place ourselves in. And realising said boxes actually inhibit growth.

Let yourself continue to day dream along the lines of what you found midweek. Imagine yourself there, where you wish to go, with what you wish to build. And instead of worrying about how you get there see yourself in that space. BELIEVE it , feel it, accept it.

If you can imagine it, you can bloody create it.

Think about it – the more we worry about a specific goal or a specific problem the more bogged down we get until we become stuck. If you are brave enough to bin what you’ve done till this point and try a different direction or two you open up to your own creativity. And it can flow once you’ve taken the brakes off.

If you even wish to think of it as believing or wishing for miracles so be it. But keep doing it.

We did ask kids – so let yourself go back into that space of possibility and dare to dream. see what comes up and decide whether to pursue it or not.

For some of you it may be as simple as devoting more time to something you enjoy or are looking to improve.

Start of the week – time to get a bit more focussed on where you want to go, who you want to be and what you want to create. I know things have been complicated but don’t allow this to distract you any further. Something you’ve been talking about or faffing about for too long needs to be looked at. Either do it, or don’t but make a decision as it allows you to move on rather than going round in ever decreasing circles.

mid week – we have incredibly powerful energies right now and you have the ability to manifest into reality more than you realise. So be clear on what you wish as you may just get it. If you focus on lack, or fear you may attract more so look at what you are projecting and if you need to change it then change it. It’s not always easy and may require more work than anticipated but trust me it’s worth it when you look back.

End of the week – dare to day dream about what could be. To dream big. Not worrying about the how. Rather freeing isn’t it. Here’s the kicker – if you can dream it, you can create it……..